Does Continuous Diffusion Of Oxygen Have Potential In Chronic Diabetic Foot Ulcers? 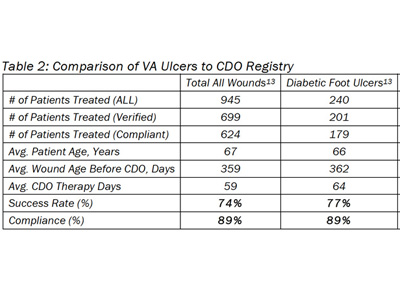 Chronic wounds, typically defined as wounds that have not decreased in size by 50 percent afterfour to six weeks of treatment, are often accompanied by complications including peripheralneuropathy, diabetes, peripheral vascular disease, and poor patient adherence. 1-4

These wounds present a major clinical challenge and oxygenation is often crucial. Since impairedblood flow results in impaired oxygen supply to chronic wounds, various authors have sought tounderstand whether saturating or supersaturating wounds with oxygen can reinitiate or evenaccelerate oxygenation and healing.5-9

How Continuous Diffusion of Oxygen Works

Continuous diffusion of oxygen differs from other oxygen delivery strategies in two fundamental ways. First, it provides continuous therapy, which allows for a 25-fold increase over competing intermittent strategies in the duration of oxygen delivery (continuous diffusion of oxygen is always on versus 90 minutes a day, 5 days a week for intermittent therapy).11 Second, it allows for full patient mobility, thereby reducing the risk of non-adherence and overall costs.

In effect, continuous diffusion of oxygen therapy delivers oxygen using the same basic mechanism as breathing: direct diffusion of oxygen into the wound from a wet surface. When one uses the TransCu O2® System (EO2 Concepts®), a cannula placed underneath moist wound therapy dressings delivers the oxygen directly to the wound. The moisture absorbent dressing controls exudate. The thin film dressing maintains a moist wound environment and protects the wound from external contamination.

The flow of oxygen from the device is such that it maintains a high concentration of oxygen over the moist wound but does not dry the wound out. Dressing changes occur in accordance with the physician’s directive and manufacturer’s guidelines to manage exudate. Furthermore, the TransCu O2® device is silent, lightweight (9 ounces), handheld and rechargeable. The device also incorporates continuous monitoring of oxygen flow rates and pressures to ensure efficacious delivery of oxygen. In addition to the device being able to adjust to environmental variables such as  low humidity, it provides constant feedback as to the flow rate, warns of blockages and prevents over-pressurization of the wound bed.

A Closer Look At A Retrospective Analysis of 25 Cases

After excluding four patients for significant non-adherence and four patients to follow-up, 25 patients were included in the study. We used continuous diffusion of oxygen both as an adjunctive therapy and as a solitary treatment in an outpatient wound care setting. The majority of wounds (22 of 25) were Wagner grade 1 ulcers on the foot, ankle, or leg with granular wound bases. Twenty-two out of 25 patients had diabetes. The patients presented on a weekly basis on average for evaluation, offloading, dressing changes and sharp debridement.

The research parameters consisted of the duration of treatment, whether the wound healed (full closure), patient adherence, wound size, percent improvement in wound size, age of wound at start of use, hemoglobin A1c level where applicable, other therapies utilized, significant comorbidities and wound locations.

Seventeen of 25 patients experienced complete wound healing, a 68 percent healing rate. Of the 17 patients who healed (closed), all had diabetes with an average 7.9 hemoglobin A1c (Table 1). The average healing time was 7 weeks with an average wound size of 6.1 cm2. Thirteen patients had concomitant advanced tissue application: 6 with Neox (Amniox Medical), two with Dermagraft (Organogenesis), two with Apligaf (Organogenesis) and three with Grafix (Osiris Therapeutics).

Out of the 25 patients, eight did not heal. Five of these patients had diabetes and the remaining three had ulcers due to PVD rather than diabetes. Three of these patients had no improvement during treatment, three had minimal improvement (5 to 30 percent) and two had moderate improvement (60 to 90 percent). The average wound size (8.5 cm2) was not dissimilar from those that healed. The average duration of continuous diffusion of oxygen therapy was just over nine weeks and we determined that failed therapy was a wound that had not decreased in size over the course of at least three weeks. Three patients went to another facility for HBOT as they had already failed multiple wound healing modalities. Two patients had leg amputations due to severe PVD.

Of interest is that of the three patients who were lost to follow up, two experienced significant wound closure. One was essentially healed (more than 99 percent) and did not return. The other patient’s wound had closed 89 percent before the patient was hospitalized for reasons unrelated to the wound.

While these data support the use of continuous diffusion of oxygen as an adjunctive treatment, the fact that four patients healed with oxygen therapy alone suggests that clinicians may consider using this treatment as a monotherapy for lower extremity ulcerations. It is interesting to note that the closure results for continuous diffusion of oxygen reported here (68 percent) appear to be repeatable in that they are similar to those reported for toe ulcers (74 percent for 20 patients), as well as those reported in an online registry for diabetic foot ulcers (77 percent for 201 patients).12,13 Similar comparisons are evident for high patient adherence to the therapy, with 89 percent adherence in this study versus 95 and 89 percent adherence reported in the other studies, supporting the ease of use of the therapy.12,13

These results compare favorably to the clinical registry that is maintained by the manufacturer, EO2 Concepts® (www.eo2.com) (Table 2). The registry contains real-world clinical outcomes that are classified as being either a Success (defined as therapy goals met or fully healed and closed) or a Failure (defined as removed for other reasons). The percentage of patients healed, CDO therapy time and compliance rates are all very similar. These outcomes are relevant in that most wounds treated had already been treated with other advanced wound therapies, such as HBO therapy, negative pressure wound therapy, skin grafting, antibiotic treatment, etc. The majority of wounds were unresponsive to other advanced wound therapies prior to treatment with CDO therapy.

The results of this retrospective study indicate that continuous diffusion of oxygen therapy, via the TransCu O2®
>oxygen delivery system, is a viable adjunctive option in the treatment of lower extremity ulcerations. Our study findings suggest this modality may be beneficial as a solitary treatment but further studies are necessary. In my experience, continuous diffusion of oxygen improves wound healing potential, even in wounds receiving advanced tissue/skin substitute applications.

Overall, the findings presented here are in line with a significant body of experimental data suggesting that increasing oxygen supply to diabetic and chronic wounds improves wound healing. Clinicians may want to consider continuous diffusion of oxygen as part of the armamentarium for chronic lower extremity wounds.