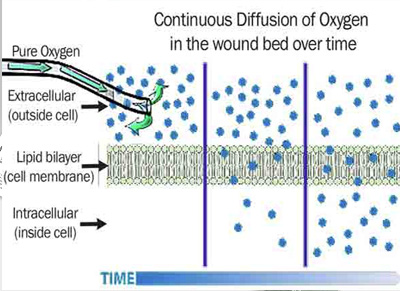 This is a summary overview of how Continuous Diffusion of Oxygen (CDO) therapy works, how it differs from intermittent oxygen therapies & the most recent supporting clinical evidence (refer to eo2.com for updates).  Detailed information follows this introductory page. Additional evidence as to how oxygen is effective in wound healing can be found in the EO2 guidance document “How Oxygen Works in Wound Healing”. (1)

Moist Wounds “Breathe” Similar to Alveoli in Lungs – By Diffusion

Moist Wounds “Breathe” Similar to Alveoli in Lungs – By Diffusion

In human tissue, oxygen levels contain approximately 50 mmHg pO2 at 3-4 mm below the wound for moist wounds exposed to air which has 21% oxygen (pO2 = 159 mmHg).  By increasing the oxygen concentration above the wound from 21% (pO2 = 159 mmHg) to 100% (pO2 = 760 mmHg), as is the case with CDO, the resulting oxygen levels in the tissue can increase to as high as 250 mmHg pO2. These levels have been found experimentally to be optimal for many of the enzymatic pathways involved in fibroblast proliferation, collagen synthesis, phagocytic (antibacterial) activity, angiogenesis (new blood vessel formation) and growth factor signaling transduction in wound repair. For more information, refer to the “How Oxygen Works in Wound Healing” guidance document. (1)

Oxygen therapies have been shown to rapidly raise oxygen levels in the wound bed, in both clinical and preclinical settings, when pure oxygen is applied directly to the surface of a moist wound at near-atmospheric pressures (not hyperbaric). Preclinically, pure oxygen applied to an open wound has been shown to increase the pO2 of the superficial wound tissue in pigs3. In this study, an increase of pO2 from less than 10 mmHg to 40 mmHg at a depth of 2 mm in the center of the wound bed was observed in as little as 4 minutes using an implanted probe.

How CDO Differs from Topical (TO, TWO) and Hyperbaric Oxygen (HBO)

There are three primary different methods of oxygen-based therapies that are used to treat wounds:  Hyperbaric Oxygen, Topical Oxygen and Continuous Diffusion of Oxygen. (4) All three technologies are similar in that they use pure oxygen as an aid to wound healing. Hyperbaric Oxygen Therapy is used to treat a patient systemically with pure oxygen at elevated pressures. Topical Oxygen Therapy is used to treat an area directly surrounding a patient’s wound using pure oxygen at pressures slightly above atmospheric. Both HBO & TO are intermittent, only providing treatment for a relatively short period of time (typically 90 minutes per day, 4 or 5 days per week), which means that the wound only receives supplemental oxygen for a few hours a day. Furthermore, neither of these technologies allows for patient mobility during treatment and can require significant time and expense associated with travel and preparation time for the patient.

CDO Therapy offers several breakthroughs in oxygen therapy in that it: 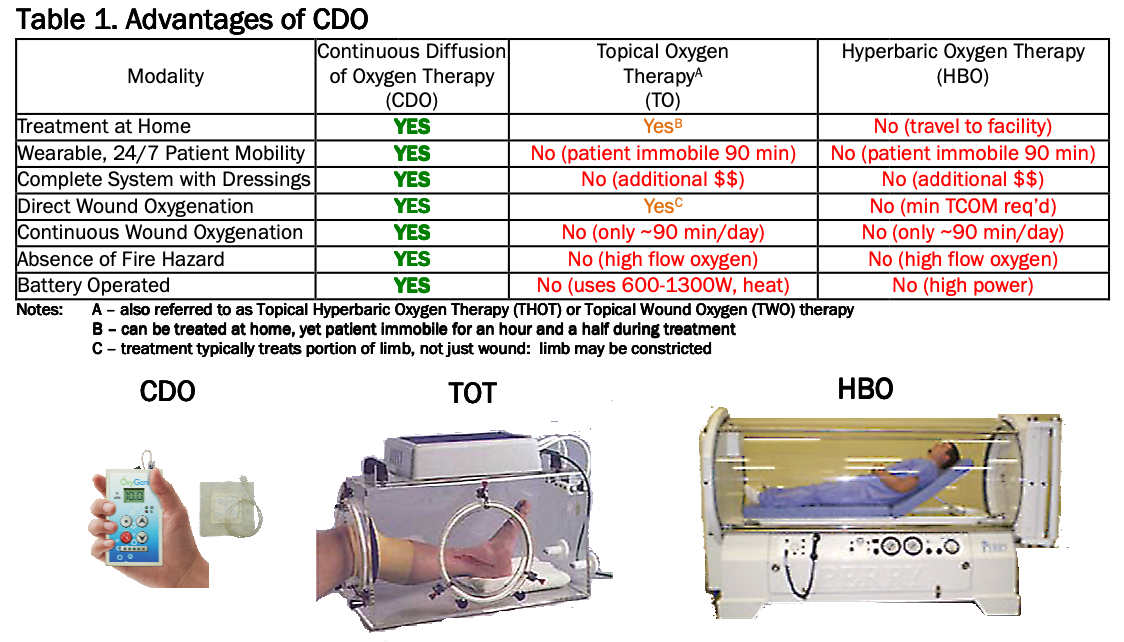 Results from a unique Tier 1A Diabetic Foot Ulcer clinical trial involving 146 patients, whichshow Continuous Diffusion of Oxygen (CDO) therapy to be statistically significant compared to a placebo arm, have been published in three peer-review articles.  The rigor of this study is rare in the medical device world: it is a fully-blinded, prospective, randomly-controlled trial with a placebo and an active arm.  Both arms received identical treatment (device, dressings, etc.) and the devices were functional in both arms. However, the oxygen did not flow to the wound in the placebo arm.  In essence, this is on par with a pharmaceutical trial where the patients and clinicians do not know the treatment arm. CMS Cited the study design as the “Gold Standard" for how studies should be designed. 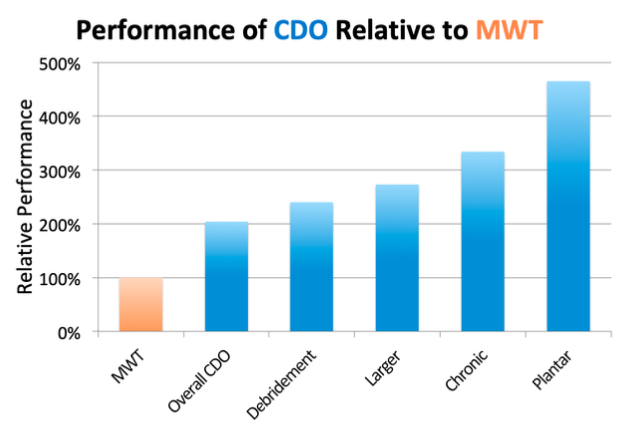 ight increase in quality-adjusted life (extension of life). Lower cost and improved outcomes were observed in most scenario analyses (87% of cost analyses and 90% of quality-adjusted life analyses). The results of this economic evaluation show that CDO therapy should reduce health care economic burden with a modest increase in quality of life outcomes. Authors state that health care decision-makers should consider the inclusion of CDO for the treatment of DFUs. 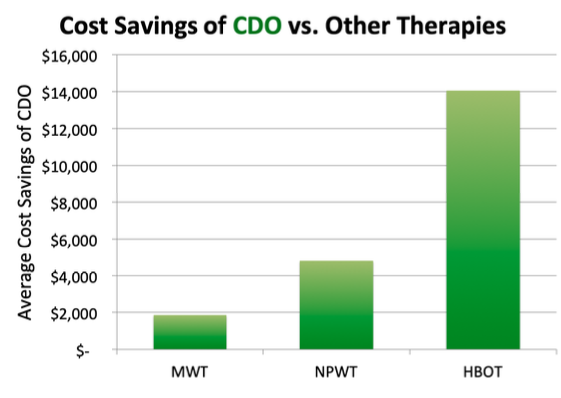 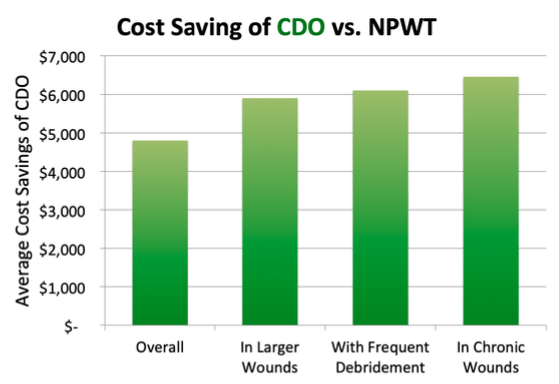 Results from a prospective trial of 20 patients to investigate reduction in pain in patients with23 chronic lower extremity ulcers found that subjects experienced wound associated pain relief quickly after starting CDO: over half the patients experienced at least a 75% reduction in pain relief by the first follow-up visit (median of 4 days) and over 90% had noticeable pain reduction (>25%) by the first follow- up visit. All subjects (100%) experienced complete pain relief regardless of wound closure rate. Multiple subjects reported complete pain relief within hours of application of CDO. Subjects also reported being able to cease using narcotics with CDO. 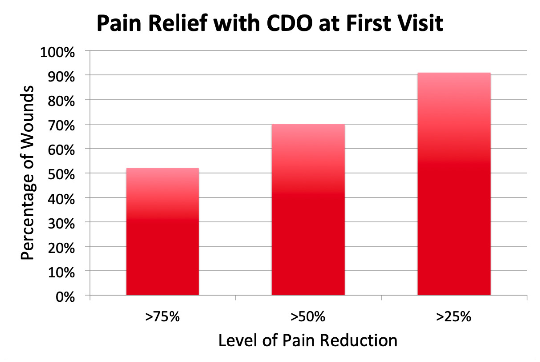 A prospective study of 20 patients investigating inflammatory cytokines (IL-6, IL-8, TNF-α),growth factors (VEGF, PDGF, IGF, TGF-β), perfusion changes peripheral the wound bed,changes in, and reduction in bioburden in a 3 week timeframe. Results showed significant increases in cytokines, growth factors and TCOM one week after application of CDO. Growth factors significantly increased between 280% to 820% in the first week. Several cytokines increased over 400% in the first two weeks and then decreased. Significant increases in TCOM indicate increased oxygen perfusion in wound periphery. Over half the wounds healed at least 50% in 3 weeks. 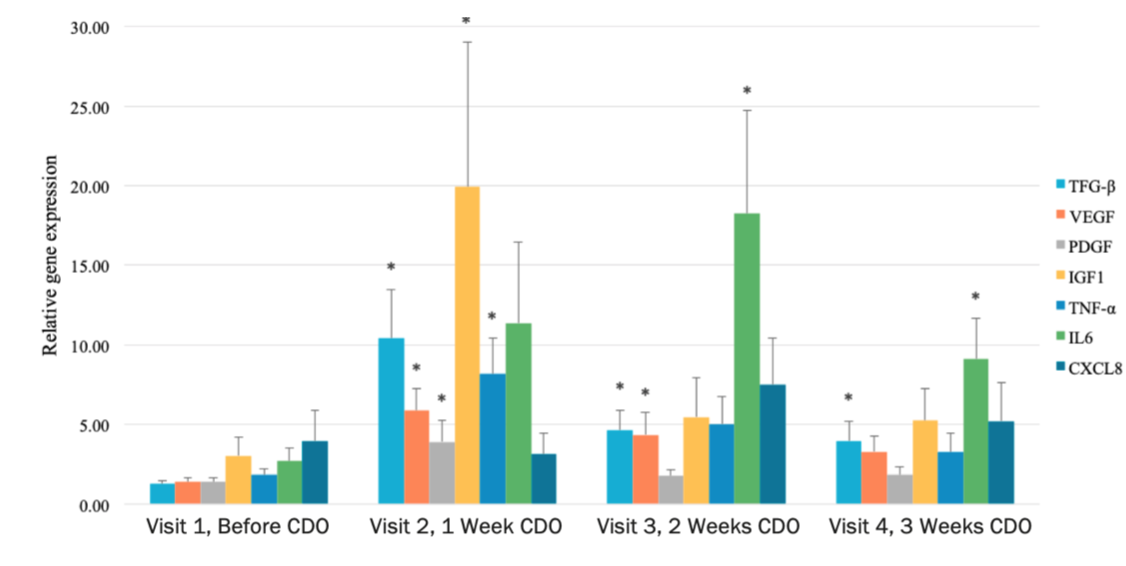 These results are bolstered by those from our post-market surveillance registry that demonstrates a success rate of 74% in 59 days in the field for a wide variety of wounds. These wounds range from small, persistent ulcers to large Stage IV ulcers and include dehisced surgical wounds, large venous ulcers, and acute surgical incisions, to name a few. It is important to note that this registry success rate is on very difficult wounds that have already been unresponsive to other advanced therapies such as NPWT and HBO and had been open for an average of 359 days (as a new technology, CDO is typically first tried on challenging, unresponsive wounds). More details of the current registry results can be found on our website (eo2.com).

A retrospective analysis on the impact of CDO in chronic toe ulcer healing for 20 patients showed an overall success rate (full closure) of 74% on wounds that were unresponsive to other therapies. The author highlighted a chief benefit being that of high patient compliance (95%), which he attributed to the device’s ease of use, the noticeability of improvement within a short period of time, and the reduction of pain.

Another retrospective analysis of 25 patients in a Veteran’s Healthcare Administration environment showed 68% full closure, both as a stand-alone and adjunctive therapy. The author found that CDO improves wound healing potential, including in wounds receiving advanced tissue/skin substitute applications.

Significant differences in the healing rate of CDO as compared to MWT were recently demonstrated in a prospective, randomized pilot clinical trial with 9 patients receiving MWT and 9 receiving CDO. The study focused on smaller DFUs (approx. 1.5 cm2), UT Grade I-III, over an 8-week period. CDO was shown to close 90% of the wounds by the end of the study, whereas the MWT group experienced 30% closure. The authors also noted significantly faster wound closure rates in the CDO arm and more noticeable differences from CDO in the more advanced ulcers (Grades II and III).

In an uncontrolled, nonrandomized study of 10 patients with venous ulcers, CDO therapy was reported to significantly (P< .009) reduce pain in a six-week period. The corresponding mean reduction in wound size was 58.9%.

Note: Refer to the Clinical Research Summary for most up-to-date overview of EO2 clinical research.