Incision Renditions: Who do some incisions fail? 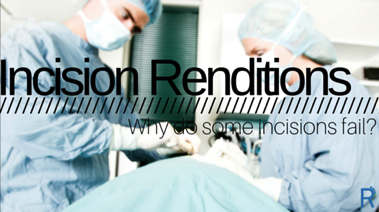 Many of us in our lifetime will have some sort of incision. After surgery, incisions will be closed by special glue, staples, or sutures (stitches). If all goes as planned, the incision will remain well approximated and be secure without problems. But what happens when an incision breaks open or it fails to heal?

Should it be re-closed, left open to air, or treated as a “regular” wound?

Normal Stages of an Incision
First, let’s take a look at an incision that goes through its normal stages. When a clean, uninfected incision is surgically closed (aka: closing by “primary intention”), it causes only a small amount of disruption to area cells and connective tissue compared to allowing a deeper wound to close on its own.

An incision does, however, cause the tissue to go through the same stages of healing that any wound does:

The incision is secured and ideally protected from stress during these initial stages by the staples, sutures, or glue. As these are removed, the suture line continues to strengthen itself for several months, resulting in approximately 80% of its original tensile strength of tissue. Although the scar line will never be as strong as the original epidermis.

Here is an incision for a total knee replacement, from when the staples were removed 2 weeks post surgery, to 6 weeks after surgery.

This incision went very well! The scar at first was very prominent and the limb was very swollen. But the incision was protected, the swelling was addressed, and there were no disruptions in healing.

Abnormal Surgical Incisions
Let’s look now at what occurs with a wound dehiscence: a separation of an incisional wound, resulting in an open draining wound and a need for focused treatment.

Case #1: Here is the ankle of a young, healthy male after a surgical repair of torn ankle tendons. A week after his surgery, the ankle became red and swollen. The surgeon determined that the ankle was infected. He then opened the incision, removed the internal sutures used to repair the joint, and left the incision to heal by “secondary intention”. The wound was 1 cm deep, extending into the joint. The second photo is taken 6 weeks after the first treatment with CDO (continuous diffusion of oxygen therapy) beneath a mild compression sleeve and has 15 times less volume than in the first photo.

Case #2: Here is the residual limb of a man with a below knee amputation due to diabetes and peripheral vascular disease. His wound showed signs of non-healing within the first week, followed by separation and deterioration of the incision on its own. His wound was not infected, but the tissue could not repair due to micro-vascular disease. The skin at the incision died off and then opened. His wound was treated with debridement, edema management, moist wound healing, and protection from injury. It took a while longer, but he eventually was fit with his prosthesis and has a functional residual limb. 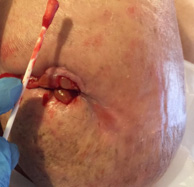 Case #3: Here is another amputation incision that remained a problem since a month after the surgery. The lateral aspect of the below knee incision kept developing red, spongy tissue known as hyperplasia. Even though the wound bed appeared small (2x1cm), when probed, the wound tunneled at 6 cm deep! The depth of the wound acted like a spring, feeding the visible wound with moisture. (Whenever the drainage amount does not “match” the size of the wound, you must probe deeper, usually there is a tunnel or sinus tract.) This woman was taken back to surgery and her wound was widely debrided after finding some debris deep within. She went on to heal nicely after the debridement. 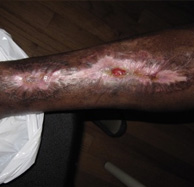 Case #4: Here is a 10-year-old incisional scar on a woman who had recently gone through significant weight loss from malnutrition and a decrease in activity. She had also returned to smoking. Her lower legs began to swell due to inactivity. The well-healed incision developed a wound.

There was no bone involved, no foreign material, and no infection. The scar tissue was the weakest skin and it could not withstand the added stress of swelling and friction. Remember, scar tissue is only 80% as strong as normal skin at its best. She went on to heal with mild compression to control the swelling, moist wound healing, an exercise program to improve her function, and by stopping smoking.

Incisional wounds can sometimes be a mystery as to why they open up or just do not heal well in the first place. But both local and systemic factors need to be addressed in order to be successful. While it may be disappointing that an incision does not hold or heal as it should, most will go on to heal if thoughtful, quick action is taken.

Do you have more questions about surgical incisions? Ask us by emailing them to info@eo2.com

This blog post was written by Robin Carlson, PT CWS
What is PT CWS? Physical Therapist and Certified Wound Specialist