Seeing Red In The Wound Bed 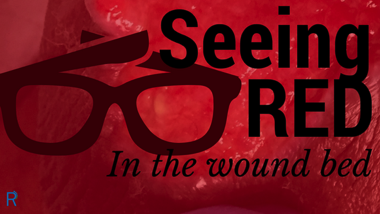 Years ago, when I was very green in the wound care field, I was asking one of my mentors, “How do I know what a good wound looks like?” She answered: “There is red, and there is RED.” One was good, one was bad. Funny thing was, I knew what she meant. 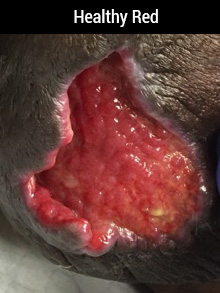 A good healthy wound bed has a bumpy, beefy appearance with a firm, attached base. This indicates that the wound is getting a good blood supply, that the moisture is balanced, and that there is no harmful pressure or excess bacteria affecting the wound. There is a robust red color of the wound itself, but no redness on the periwound (or surrounding) skin. 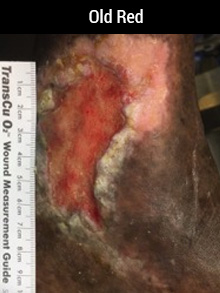 An older, stagnant wound can sometimes look healthy, but if you take a closer look there are some red flags that will distinguish it from a healing wound.

Look, again at the pale pinkish hue to the wound bed, shown above. There is a separation of the skin edge from the wound base. When probed the edge has a few millimeters depth at most of the perimeter. When cleaned, the wound does not bleed that easily. The size has not changed in several weeks: the wound is stagnant. While there is no obvious sign of infection, there also is no indication that this will heal without some change in course. If the wound size does not decrease in a significant percentage (Length x width x depth) over 2-4 weeks, then treatment should change. While the rate of expected healing has been shown to vary with type of wound, the progress still needs to be present. Remember: Even if a wound bed looks pink or red, if it does not make progress it may not be healthy.

While there is nothing better than a cool dish of raspberries on a hot summer day, the appearance of raspberry red in a wound is not a good thing. The darker discoloration is usually a sign of pressure necrosis. On the Achilles wound pictured below on the left, the patient had been wearing a surgical shoe that was rubbing over the distal half of the wound. 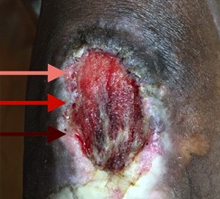 The photo shows the deterioration occurring in the wound: the top half is relatively healthy, the midsection is turning a bit darker and the distal half is becoming necrotic as the tissue dies off from too much pressure and friction. The first indication of the damage is often the darker discoloration of the wound. 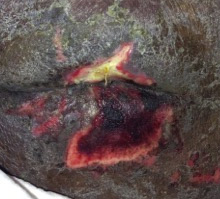 The wound shown below is a deeper dark red of unrelieved pressure. The very dark red, almost black tissue in the middle of the buttock wound is evidence of damage from pressure. Tissue gets starved of oxygen with continual pressure, blood supply is shut down to the skin and the skin dies off. 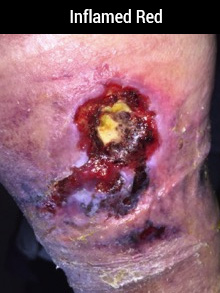 While this wound also has some dark bluish/red wound tissue that appears similar to the raspberry red, it is coupled with inflamed skin around the wound. This inflammatory wound has increased in size over a number of days to weeks, but there is no history of friction, pressure, or other trauma. The unknown cause and the advancement of tissue destruction is a red flag that this wound bed is not healthy, even though parts of the wound are vibrantly red. 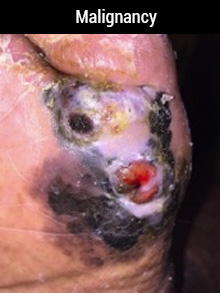 Occasionally, a small persistent sore will crop up that bleeds easily and does not respond to treatment. It may be in any area of the body and may look like it is almost ready to heal, but never does. Pictured above is a 1x1cm wound with consistent mild bloody drainage that neither worsens nor improves. It has been there for 10 years. On biopsy, it is found to be basal cell carcinoma. Again, the wound itself looked like a well-vascularized, clean wound. Certainly the dark discolored surrounding tissue gives a clue that this wound is not a “normal” wound.

If it does not look right or act right, look further for an accurate diagnosis! There is red and there is RED.

I hope that you feel more well-read on the differing descriptions of red wounds and their many presentations. We have truly just scratched the surface! Perhaps now you feel more comfortable in identifying which wounds are healthy and which need further investigation or treatment modifications.

Coming Next Month
We will review the challenge of evaluating redness in the skin and the periwound tissue.

This blog post was written by Robin Carlson, PT CWS
What is PT CWS? Physical Therapist and Certified Wound Specialist